You're away at work and you're wife hasn't gotten back to you in a while. Your wife confesses she's been sucking and fucking HUGE, FAT cock while you been away at work. She left you a shocking voicemail... but you find yourself unable to stop masturbating...Audio only file.

Custom Ordered Video: So we have a great new TV and my boyfriend has come over with an action movie for him and I and my Step-****** to watch. I tell him to sit close to the TV while my Step-****** and I lay together on the couch. Once the lights are dimmed I decide to be the best step-****** EVER! My boyfriend has NO idea what's going on behind him! We're in a race to get each other off before the movie ends...and I gobble up all of the creamy evidence trying to not get caught!

You have 2 options for this summer : 1. Staying all summer in your sad bedroom , binging on clips and jerking alone ; 2. Funding my man's and I hot vacation .Choose option nr. 2 and it's going to be the best summer of your entire cuck loser life . You will spend the whole summer worshiping me and my man , watching from the corner of the room , how we have wild , passionate sex , being our personal human towel and wipping the sweat off of our bodies , while we still fuck . Doesn't it sounds amazing and impossible to say no ?And if you're lucky enough you will have the privilege of watching me and my man having threesomes . Obviously , you will not be the 3rd person from our sexual activities ! You will just be our clean up bitch boy cuck.Fund our vacation , cuckie ! 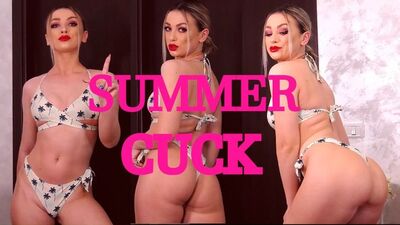 After I could persuade my friend Markus to a hot lunch break in the first part of this two part clip, it really gets down to business in this second part. I couldn't wait to tell Markus about this fucked up loser. I leave out absolutely no detail and amuse us deliciously at his expense. Markus is simply the exact opposite of this fuck-up. He is well built and has a really big cock. Of course, I also oblige my Bimbo to acknowledge this, in which I let the two compete for cock comparison. Of course, the appendix of this good-for-nothing can in no way compete with the stately piece of Markus. To draw the fronts even clearer, I oblige this jackass to blow a real cock until the happy end and to absorb the so valuable cum with so many alpha vitamins in it. Well dream dancer, real men get pussies, you on the other hand must be satisfied with cocks!

Any other man with even an ounce of dignity would have stood up to me by now, but now you: You cucks just want to experience the ultimate humiliation; total ego destruction, being reduced to little more than an emasculated servant who worships our feet and licks up our loads after I've been fucked by a real man. Just want to be tied up, made helpless and made to watch as you're reminded of your total inferiority, how you could NEVER provide anything as good as alpha cock. That useless cock of yours ought to stay in chastity forever. You won't be having sex ever again. Really I ought to make you suck cock and take dick instead 'cause you're about as well endowed as a girl. Stroke your cock to being humiliated and degraded by me; you know this is what you deserve. 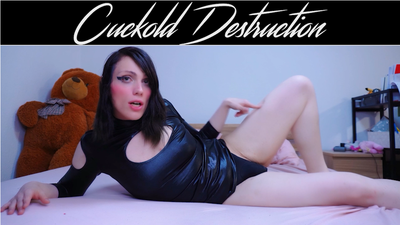 ITALIAN LANGUAGEThe first greeting my bull and I address to you is "Hello loser jerk". Sitting comfortably on the sofa, we look down on you with contempt. I rub against him and caress him. This is a handsome physique! He is worthy to receive my touch and to have me near. And the more I provoke him, the more the pack swells. It is not difficult to understand that he has a big cock. This is why I chose him. Unlike you who instead are just a hypodotized loser and you have to crawl at our feet sawing the peanut that you have between your legs. Take a good look at us together. I dressed and he naked now, excited. I put on some black gloves and start sawing him off. I want to make you suffer of envy because I am masturbating him and you cannot have this privilege. Yours is too small and inadequate to receive such attention. Always humiliating you, I make him cum on my glove. Now do you understand why I wore them? To make you drink all his semen...RE CAZZOIl primo saluto che io e il mio bull ti rivolgiamo è "Ciao sfigato coglione". Seduti comodamente sul divano ti guardiamo dall'alto verso il basso con disprezzo. Io mi strofino contro di lui e lo accarezzo. Questo si che è un fisico prestante! E' degno di ricevere il mio tocco e di avermi vicina. E più lo provoco e più il pacco si gonfia. Non è difficile capire che ha un cazzo grosso. Per questo l'ho scelto. A differenza di te che invece sei solo uno sfigato ipodotato e devi strisciare ai nostri piedi segando la nocciolina che ti ritrovi fra le gambe. Guardaci bene, insieme. Io vestita e lui nudo ora, eccitato. Indosso dei guanti neri e inizio a segarlo. Voglio farti morire d'invidia perché sto masturbando lui e tu non puoi avere questo privilegio. Il tuo è troppo piccolo e inadeguato a ricevere simili attenzioni. Sempre umiliandoti, lo faccio godere sul mio guanto. Ora hai capito perché li ho indossati? Per farti bere tutto il suo seme...

This big baldhead really seems to know how to buy his way into any girlÂs panties. He gives Cristall Rush what she wants and gets what he wants from her Â in front of her pathetic wimp of a boyfriend! Yeah, literally, he bangs Cristall with her BF watching them because she wants that humble cuck to feel how much of a failure he is! Ahh, his tears feel even better than his babeÂs tight pussy!